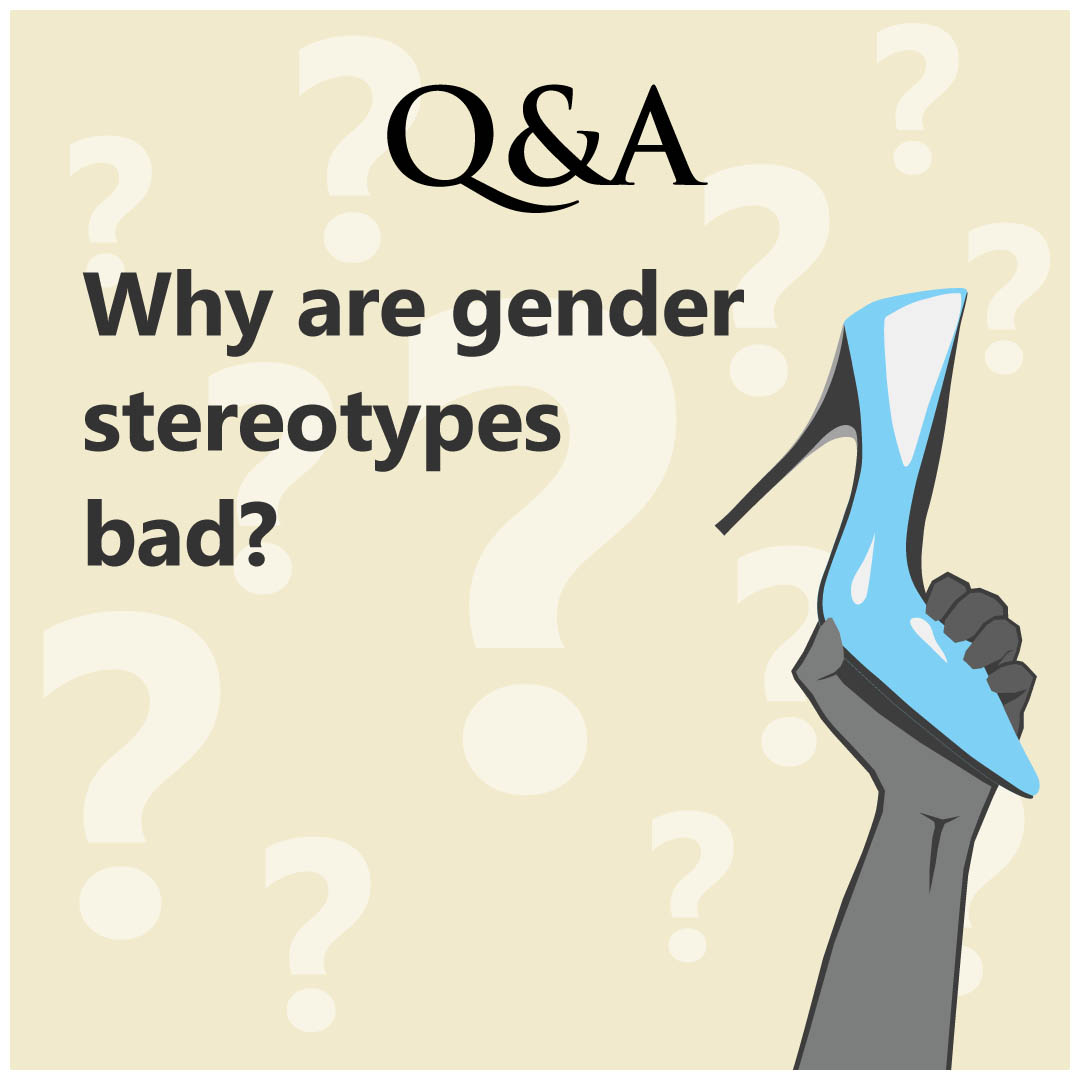 Why are gender stereotypes bad?

A gender stereotype is defined as an overgeneralisation of characteristics, differences and attributes of a certain group based on their gender. Typically this is most widely understood in the context of the gender binary of men and women. For example, women are often portrayed as being emotional, caring, nurturing and in need of protection. Men are often characterised as being leaders, rational, career driven and strong. However, a gender stereotype is harmful when it limits the group’s capacity to develop their personal abilities, pursue professional careers and/or make choices about their lives.

Other examples are where assertive women are called “bitches” and “whores”, while men who don’t appear or act masculine are called “sissies” or “wimps” or assumed to be gay, which is a very offensive stereotype in the LGBTQIA+ community.

Gender stereotypes are complex and originate from local culture and traditions. Children learn what constitutes female and male behaviour from their family and friends, the media and institutions including schools and religious bodies. Gender stereotypes can have an adverse effect on all genders, as young people find themselves regularly exposed to messages about how boys and girls should look, behave and play. These socially accepted and often unconscious ideas start to form in infancy.

Gender stereotyping results from unconscious biases held by all of us. Unconscious bias happens when our subconscious makes assumptions about people based on their background or perceived background.

Everyone has unconscious biases. An individual can be unconsciously influenced by a stereotype even if they do not rationally subscribe to it. Becoming aware of our biases and working to counter them is an important way to combat the negative effects of gender stereotypes.

Unconscious bias arises because we have to process vast amounts of information every second. In order to avoid being overwhelmed, our brains have to make assumptions based on previous experience and find patterns to speed up decision making.

However, these assumptions tend to be based on simple characterisations of people such as their age, race or gender. They are communicated through micro-messages such as body language and choice of words. This is more likely to happen when we are stressed or tired, and can cause problems by affecting our beliefs and treatment of others.

As our society moves to a broader construct of what “gender” means, individuals who are stuck in this binary idea of gender have a difficult time wrapping their brains around individuals who do not fit into a strict gender dichotomy, or do not identify with any gender at all.

We are easily thrown in terms of our interactions with others for whom our brain has not been programmed to stereotype to some degree. This is because stereotyping enables us to make sense of the world – at least sometimes. Someone who considers themselves “Gender Fluid,” or “Gender non-conforming,” threatens the stereotypes we are familiar with and for that reason can seem is weird and/or threatening because we can’t even stereotype them.

The ASA said the review had found evidence suggesting that harmful stereotypes could "restrict the choices, aspirations and opportunities of children, young people and adults and these stereotypes can be reinforced by some advertising, which plays a part in unequal gender outcomes".

"Our evidence shows how harmful gender stereotypes in ads can contribute to inequality in society, with costs for all of us. Put simply, we found that some portrayals in ads can, over time, play a part in limiting people's potential," said ASA chief executive Guy Parker.

Media defines culture, and culture defines change. Individuals may see thousands of advertising messages a day in social media, TV, movies, newspapers or magazines. Those messages matter, because they influence our perceptions of gender.

When it comes to the portrayal of men in media, the fact is that harmful stereotypes do exist about what it means to be masculine, focusing on power dynamics, domination of other men, subjugation of women, violence and aggression. When this gender inequality occurs in the background of gender stereotyping, this is in the most basic sense sexism.

We’ve written new scripts for our daughters about strength and leadership, which are slowly starting to gain representation in media, but what about our sons? What do we want to redefine about their future manhood? New definitions can emerge, though they are often in conflict of our understanding of the world through existing stereotypes. The quantity and quality of advertising messages will largely determine how quickly and how well new roles are defined and adopted by men.

We need to stop seeing challenges to rigid gender roles as a threat, and instead question what’s working for us now and what’s no longer working. The truth is that some gender stereotypes can hold both men and women back from being the best that they can be - and impact our mental health.

Take some time to evaluate the gender stereotypes you frequently encounter and ask yourself whether they truly work to elevate your potential equally alongside others or at their expense because of their gender. Are they genuinely a threat to you or are you simply unconsciously obeying gender stereotype programming which you’ve received since you were born?

When we see a gender non-conforming person in our daily life experience, men in heels being only one example, we should recognise not only the privileges we have in our own position, but the background of inequality within which they have risen through with the mental strength and courage to step outside in the face of gender stereotyping. We may judge them for being "weird", within our own limited experience, or we can regard them as a strong, courageous and individual blueprint for new and positive role models.