What Is Gender Nonconforming?

It's often a simple notion in your own head... "I like to wear heels and would like to wear them all the time". Ultimately you don't care what others think. You could be gender nonconforming. But what does that mean? This article from Psych Central unravels the meaning and puts it into context with other terms such as non-binary, genderqueer and genderfluid.

"Gender nonconformity is a way of expressing rejection of societal gender roles and expectations.

It’s best to inquire about how a person identifies and what pronouns they use rather than making any assumptions." 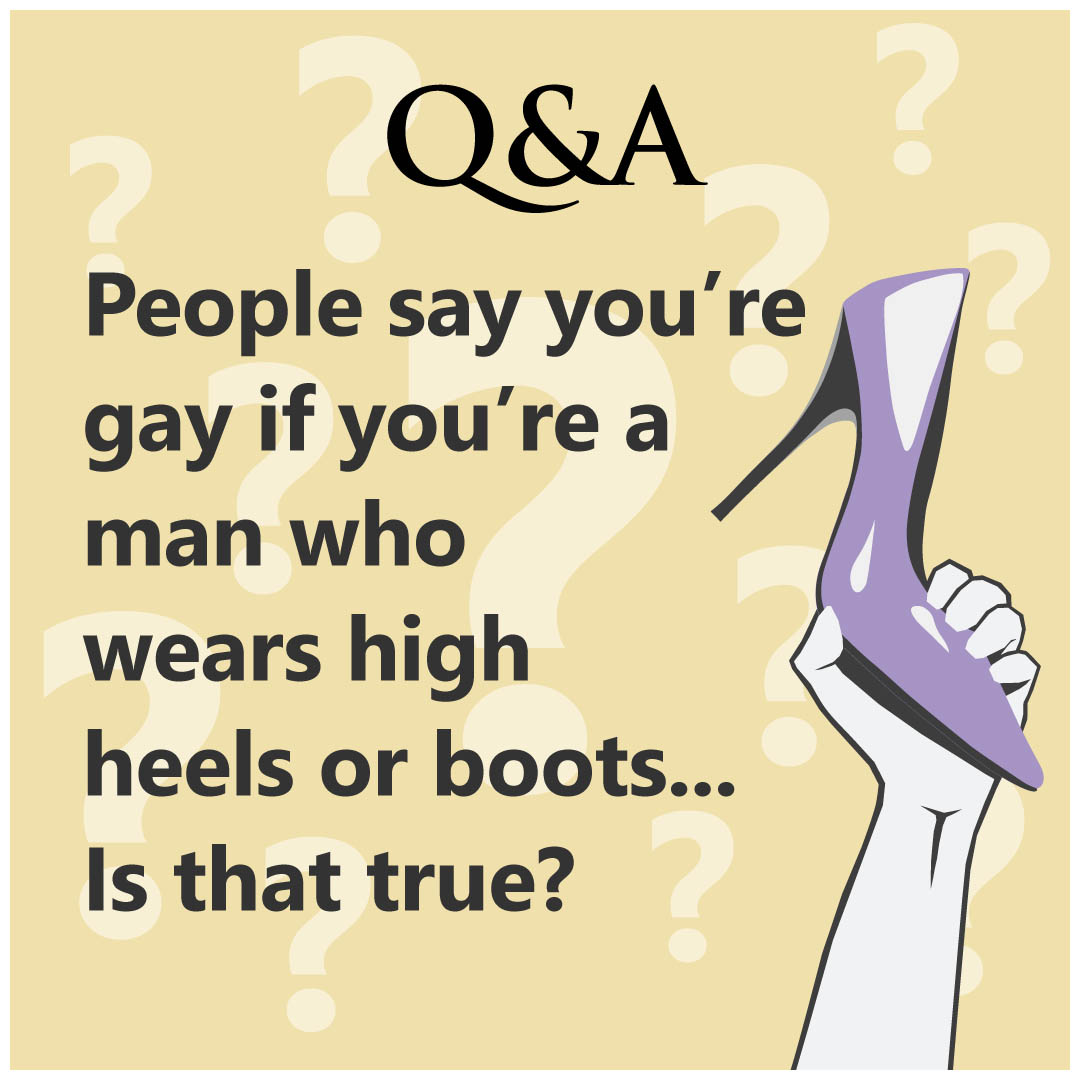 People say you’re gay if you’re a man who wears high heels or boots... Is that true?

It may be true that people say that, but it’s certainly not true that any item of clothing or footwear can ever change your sexuality when you put it on. To even suggest that is ridiculous.

In talking to various people during my research for this answer it was by no means conclusive that gay men are more likely than anyone else to wear heels and boots. They don’t need anyone’s judgement any more than anyone of any other sexual orientation, straight, bi or otherwise who want to express themselves with their clothing choices, but one thing is certain it’s not clothes that determine any person’s sexual orientation.

Deconstructing gender stereotypes is the key to changing this situation. There are many on Instagram who are behind that movement and call it out. We all need to play a part if we want to freely express ourselves. Raising awareness via Instagram other social media and blogs will help, but we also need open and honest conversations with the people around us. While we may be comfortable, familiar and accepting of the notion that clothes have no gender and don’t dictate your sexual orientation, to most people that will be a new concept, so perhaps it's time for a coffee and a chat...

Thank you again to everyone who contacted me with their perspectives on this topic during my research. Much appreciated.

Comments from our readers

We had some great comments on this question posted on our Instagram page for previous posts of this Q&A issue...

"No, you’re a person who just happens to like them. Nothing about being gay or straight etc. Do women who dress like a man get called gay"

"As a pre op transgender wearing heels comes naturally to me, even driving in 3 inch block heels no problem"

"After all it is simply an item of clothing. And when you go back and look at the history of boots particularly over the knee boots and thigh high boots they were originally designed hundreds of years ago for men all of this stereotyping people has got to stop gender neutral fashions should be everywhere and we should just be allowed to wear what we want wearing a pair of boots that are marketed for women is not a sign of being gay it’s just a freedom of your own expression. I seriously wish all boot Manufacturers would start marketing to men there are so many of us out there they enjoy the pleasure of wearing a pair of boots design for women and are afraid to come out there is no reason to be afraid times are changing but they need to change quicker."

"Speaking as a heterosexual happily married man who has enjoyed a lifelong passion for wearing women’s boots primarily low heeled or up to an inch and a half out in public for many, many years under my jeans. I do not agree that you are a gay man who wears them. I simply feel complete and comfortable wearing boots over normal shoes but that does not make me gay at all I have no desire to make love to someone of the same sex. I am not against that. I believe everybody should have the right to live their life really and express themselves as long as they are not hurting anyone. You’re absolutely right the time has come to do away with a stereotype labels put on people."

"Only a few gay guys appreciate high heels. They even often hate them because it’s woman related."

"Of course everyone is free to wear whatever they like, and should! Speaking purely from my experience, I’d say it is more common to find straight guys who are into traditionally feminine shoes like high heels. Gay guys are often into traditionally masculine boots like motorcycle or combat boots. In other words, if you are attracted to women you like women’s shoes and if you are attracted to men you will prefer men’s shoes. So perhaps which kind of footwear one likes does have something to do with sexual orientation—just not in the way many people think."

The Sydney Morning Herald reports on the speech made by Australian Labor MP Stephen Jones to Parliament during the debate on the proposed Religious Discrimination Bill.

Mr Jones talked about his Son's gender identity and revealed the grief that his family had borne from the suicide of his gay nephew. He implored the Prime Minister to see things from another point of view by putting himself into his son's heels.

This is an important story, which we will come back to again for more reports, as it highlights the front-line in creating legislation which removes discrimination and provides support for people who want to live their lives authentically and without compromise.

When Boys Wear Girls Clothes: Should I Be Worried?

Kidadl takes some of the confusion out of raising a child that wants to wear clothes not normally associated with their gender. Kids are born open-minded and are taught social norms by us, like what clothes a boy or a girl normally wears. This is also reinforced by their experience in the world around them. While this article is aimed at boys wearing girls clothes, it applies equally to girls wearing boys clothes, although through deeply engrained patriarchal practice, that has not been seen as carrying the same social stigma. The article concludes that it's fine for a boy to wear "girls" clothes, which it should, as clothes have no gender, and that we should encourage our kids to live as their authentic selves.

It's encouraging to see articles like this as it does seem to show that attitudes towards gender and clothing are changing. Our children are our future hopefully they carry a new hope for future fashion.